In the 15 years I was seeking a diagnosis, I tried every nutrition strategy I could think of. You name it; I did it. I'm a nutritionist, so it was interesting to experiment, even when it wasn't helping. Most of my experiments were very nutritious, but once - when I had run out of healthy diets to try - I even did a "coffee and croissant diet" for a month, thinking that while it would cause plenty of health issues, at least they would be KNOWN issues, instead of the mysterious ones I'd later learn were POTS. Mmmm...that was a tasty month.

Anyway, I know that many POTS patients contemplate different nutritional approaches, because it's a very frequent question in online support groups. To get some answers, we used the POTS Patient-Powered Survey to ask patients about their experiences with different diets, and the results are in the graph below.

The survey asked 450 participants "Do any of these dietary approaches help you control your POTS?" Answer choices were "Helps lots!", "Helps some", "Doesn't help", or "Don't know." For the purposes of this analysis, we wanted only opinionated answers, presumably from people who had tried the specified diet, so we removed the "Don't know" answers and list below the number of opinionated patients for each dietary strategy. We then list percentages of opinionated patients who said each diet either "Helped lots!" or "helped some." Here's how it came out: 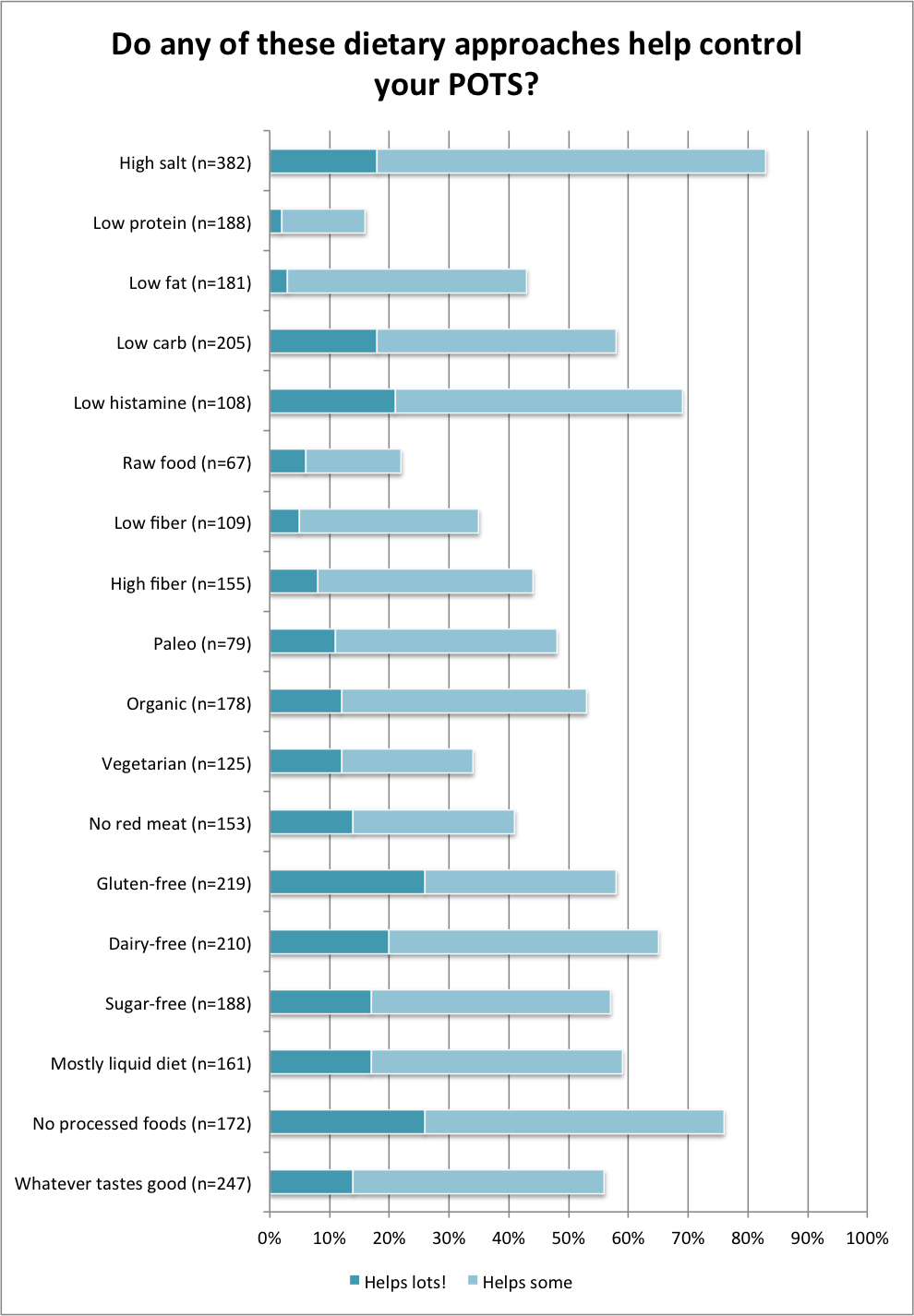 "n=" refers to how many opinionated respondents answered about that diet.

What stands out most to me is that 26% of patients who had an opinion about a no-processed-food diet said that it helped lots. Another 50% said that it "Helps some." That's promising! While giving up processed foods takes discipline, it has benefits for many other aspects of health...heck, almost everybody has to eat that way eventually if they want their cholesterol, weight, blood sugar, etc. to stay healthy.

Another promising finding involved the low-histamine diet, where 21% reported that it "Helped lots!" and another 48% said it "Helped some." This diet is more work, in my opinion, because it largely requires super-duper fresh foods, but there are loads of online resources and recipes to make it easier.

Not surprising, the high-salt diet also got high ratings, with 18% saying it "Helped lots!" and another 65% reporting it "Helped some."

Several of the other diets also appeared promising for the majority, even if they only "help some." Ten of the 18 dietary approaches mentioned were rated as at least somewhat helpful by the majority.

Also interesting is that every single diet listed was rated highly by at least a few people. There were no complete "duds."

Finally, another encouraging takeaway is that many of these diets can be done simultaneously, perhaps with additive benefits. It gets difficult to keep adding constraints to your diet, but these data suggest it might be worth a try to mix-and-match approaches.

We have lots more findings here, or to receive occasional email updates on new findings, you can sign up on our homepage. Be well!